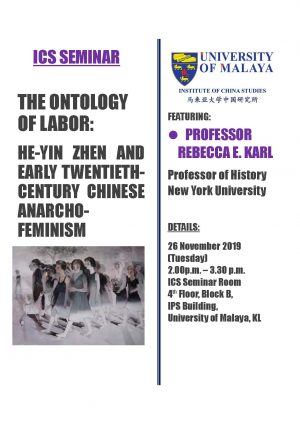 The talk will focus on He-Yin Zhen’s (ca.1886-1920) systemic thinking about the historical instantiations of female and human oppression. The sources for the talk are drawn from a series of critical essays about her contemporary world written in 1907-1908. Published in the journal she co-edited in Tokyo, Tianyi bao (Natural Justice), He-Yin’s critiques encompassed a spatial and temporal totality through which she understood all hitherto existing social relations. Not only, then, does the journal offer some rare early feminist critical analyses of political economy, capitalism, the modern state and patriarchal systems, but He-Yin Zhen herself offers some of the most acute critiques of the intertwined systems of patriarchal and economic-state power available at the turn of the twentieth century in China (or even elsewhere). The talk will concentrate on He-Yin's analysis of labor, female labor in particular, as a form of ontology and a form of enslavement.